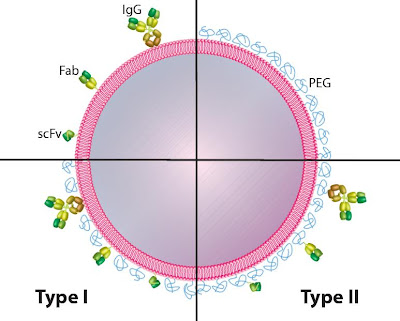 Target cell recognition by immunoliposomes is influenced by two factors:

1) The type of the antibody molecule (ie, whole antibody or antibody fragments)
2) The chemistry of conjugation (eg, random coupling vs directional coupling)

It has been extensively shown that whole antibodies coupled to liposomes are highly immunogenic. These liposomes are rapidly eliminated through Fc-mediated phagocytosis by macrophages of the liver and spleen, and also by tumor localized macrophages.


scFv fragments are the smallest fragments to contain the entire antigen binding site of an antibody. They are formed by connecting the variable heavy and light chain domains with a short peptide linker with 15-20 aminoacids. scFv molecules have an average molecular weight of 25 kDa and can be produced in bacteria.

Coupling of antibodies to preformed liposomes


In post insertion method antibodies are first conjugated to Mal-PEG micelles. A study by Nielsen et al. published in Biochim Biophys Acta (2002) 159 (1-3): 109-118 has shown coupling efficiencies up to 95% and preserving more than 80% of immunoreactivity using this method.


Drug targeting with immunoliposomes is highly complex and influenced by various parameters and both the target site and the liposome.

Therapeutic efficacy of immunoliposomes similar to regular liposomes is also dependent on the rate of release of drug and the lipid composition of the liposomes.

Unfortunately, the major problem with immunoliposomes is their poor extravasation properties. Extravasation is antibody independent and it is the rate limiting step in the tumor cell targeting of solid tumors. This will restrict the applications of immunoliposomes to those cancers in which tumor cells are readily accessible such as hematological malignancies or minimal residual diseases.

To circumvent the problems associated with poor extravasation of immunoliposomes new approaches are developed to combine immunoliposomes with vascular targeting. In this approach liposomes are targeted to cells associated with neovascularization in tumor tissue. This is a clever strategy because all solid tumors depend on neovascularization in order to grow and also tumor blood vessels are easily accessible for immunoliposomes.  Endothelial cells are genetically stable and should not become resistant to immunoliposomes therapy. Several antibodies and antibody fragments recognize antigens associated with endothelial cell activation and proliferation. These antigens include E-selectin, vascular endothelial growth factor receptor-2, the fibronectin splice variant ED-B, endoglin (CD105), vascular cell adhesion molecule-1 and tumor endothelial marker 1.  In vivo study of anti-ED-B scFv immunoliposomes showed 62-90% reduction of tumor growth in F9 teratocarcinoma bearing mice in comparison to animals treated with untargeted control liposomes.

This questions was also answered on Quora: